Early in 1903, an avid group of young men discussed the possibility of forming a rowing club. An inaugural meeting was held in the Norfolk Arms Hotel, Rundle Street, Adelaide, South Australia on 6th February 1903 where it was proposed the new association be called the Torrens Boating Club.
With a duly elected committee and approximately 40 members, the old Banks Rowing Club boat shed plus eight boats were purchased for the sum of £60.00 ($120.00), and so it was the Club took to the water, racing in their scarlet guernseys, white hats and knickers.
The club raced very competitively over the next 15 years until the outbreak of World War I, when rowing came to a standstill with a high enlistment of rowing members throughout the country. The Torrens Club was kept alive by a few older rowing stalwarts during the term of hostilities.
In the 1914 rowing season, the first competition for the Walsh Shield was held.  This event is an intra-club, “splash and dash” event over (about) 200 yards. The event is held several times during the rowing season with the first series of races traditionally held on Opening Day. Crews of four are selected by drawing names of participating club members from a hat.
Here are the original guidelines and scoring protocols to determine the season winner.
R.A. Walsh was President of the Club 1915-1918. The first winner was Pte C.N. Gahlen in the 1914-15 rowing season.

At the end of the war in 1918, the Club returned to full activity. Over the next decade Torrens competed well and won more than the lion’s share of victories both locally and interstate.

During the 1932-33 season, the old boat-shed was condemned by the City Council and demolished ready for a new two story brick boat shed that still stands to this day.
The Club’s first annual dinner was held in 1935 in the Hotel Rundle. The dinner has continued to be the Club’s most popular event and is now held annually in the top floor Function Centre. 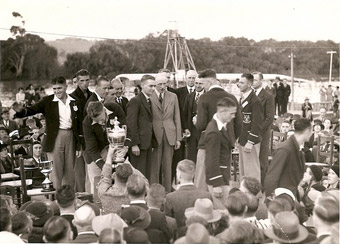 In 1937, five oarsmen, the coxswain, the coach and manager from Torrens were selected in the SA King’s Cup Crew. That crew duly won in fine style at Murray Bridge.

In 1939, World War II plunged the world into chaos again. Rowing once again ceased as a large number of oarsmen enlisted in the forces, while others worked in munitions and defense industries. With peace declared in 1945, the Club was back on the water with the return of enlisted men and munitions workers.

The next decade was a very consistent on-the-water performance era for the Torrens club. Success came through a multitude of wins in club and championship races. State pennants were almost a foregone conclusion for Torrens and this formed a sound base for the Club for the next two decades. 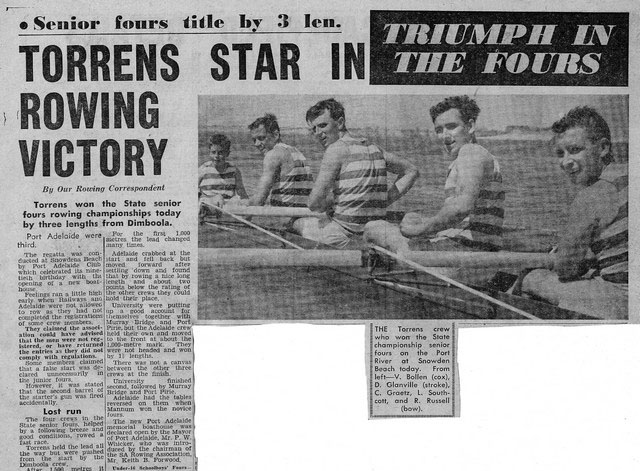 Success continued over the period on 1967-74 when the club had a group of Lightweight oarsmen who covered themselves with glory by winning State titles, two National titles and formed the majority of the winning South Australian state Penrith Cup crew. This was the State’s first ever win in this event. 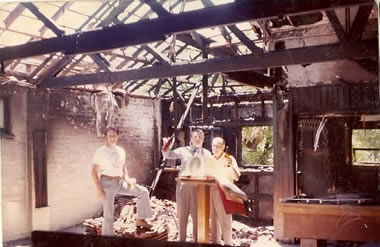 Tragedy struck the club in 1975, when the top floor of the boat-shed was gutted by fire. Only the expertise of the fire officer in charge (an ex-TRC oarsman), saved the boats and bottom floor of the boat-shed. Over the next few years the untiring efforts by a small group of stalwarts saw this “phoenix” rise from the ashes, and the Club was back in business.

The 1980s onward have seen TRC representatives achieve much. Among these achievements were many State and National successes, Australian and Olympic selection with members of the winning SA King’s Cup crews of 1981, ’82 and ’83 and SA Youth Eight in 1983.

History was made at the 1983-84 AGM when members voted for the admission of females into the TRC as active members.

The Los Angeles Olympics saw two TRC members and a coach gain the Bronze medal in the women’s coxed four event. From 1980 to the present day the club has had 46 members selected to row for Australia in various categories. Included in these were eight Olympians.

In recent years, the Club acquired a boat-shed bay at the West Lakes South Australian Aquatic Centre, ensuring the Club has the equal of the best facilities and equipment for its rowers.

With the turn of the century came the Sydney Olympics with “our Sal” (Sally Newmarch) placing a creditable 4th in the WLW2X and  TRC’s Jo Lips stroking the Gold Medal WLW4X at the 2001 World Championships in Lucerne, Switzerland. 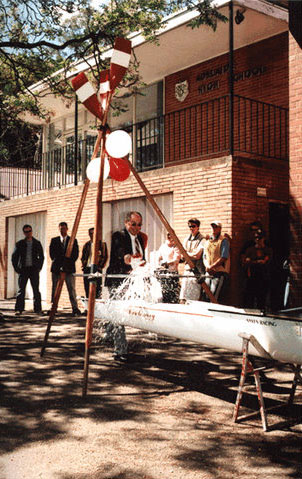 In our centenary season of 2003, our traditional Opening Day, was postponed by a week as a mark of respect on a national day of mourning for the Bali bombings. On this day, we christened our new 8+ called “Centenary 2003”. We also held our Christmas Reunion and a Centenary Annual Dinner for 270 people at the Stamford Plaza Hotel, North Terrace . Old members attended from all over Australia.

On the water, Torrens Rowing Club was South Australia’s most successful club in this year, winning both Men’s and Women’s 1st Grade State Championships, both Men’s and Women’s Premierships, as well as collecting 5 Gold, 4 Silver and 2 Bronze at the National Championships. Twelve of Torrens Rowing Club members were selected to represent the South Australia at the interstate regatta. Further, Miranda Bennett and Sally Newmarch won Bronze in the Lightweight Women’s Quad at the 2003 World Championships in Milan.

Since the early beginnings of the TRC, the status of the Club and its members has become firmly entrenched as one of the respected rowing clubs, not only in South Australia, but throughout Australia.

Our Club has a traditional anthem. Learn the words and listen to it here.

Many older members and oarsmen, some retired from active competition and others who still regularly participate in Masters’  racing, form a group within the TRC community known as the TOMs (Torrens Old Members).  They have a history all of their own.
For a more detailed history of our Club provided on the Rowing Australia website, see Torrens Rowing Club, 100 Years. There you will find the names of past Presidents, Life Members and other officials of the Club from its inception.
Many thanks to Bob Russell for his efforts to ensure the Club’s history remains documented.